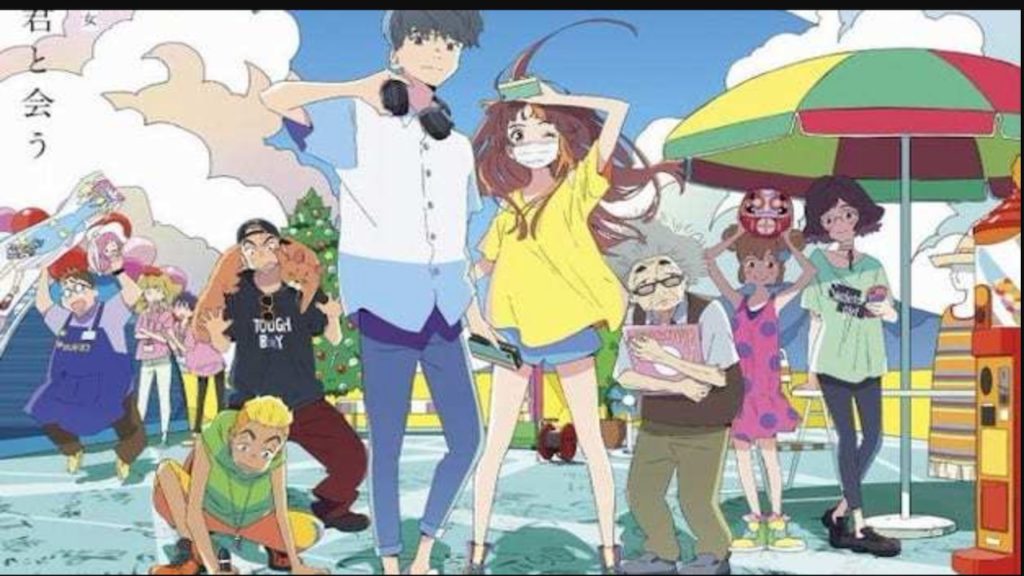 What will happen when a boy who is terrible at communicating with people and a popular social media girl who hides behind a mask meet?

Words Bubble Up Like Soda Pop tells the story of how words and music can bridge the gap between two different but similar people.

The plot revolves around the fateful meeting of the protagonists Cherry and Smile in a mundane provincial city’s suburban shopping mall.

Cherry is a boy who always wears a headphone to block out the outside world and who can only express his feelings that he cannot say out loud through his Japanese haiku poems.

Smile is a famous internet star who always wears a mask to conceal her dental braces and large front teeth. Behind this, she streams a video about seeking “cuteness.”

How will social media help play out in their budding relationship?

The anime film will be the voice acting debut of Kabuki actor Ichikawa Somegorō VIII, together with actress Hana Sugisaki who formerly starred in When Marnie Was There and the live-action version of Bleach.

Words Bubble Up Like Soda Pop Release Pushed Back

The film is produced as the tenth-anniversary project for the commemoration of Victor Entertainment’s anime music label, Flying Dog.

Words Bubble Up Like Soda’s official website originally posted a teaser trailer video announcing May 15 of this year to be the official release date.

However, due to the declaration of the state of emergency in Japan by the Japanese government against the recent viral outbreak, the official website of the film had announced on April 14 that the film’s opening will be pushed back to a later date.

They wrote that the decision was made after careful consideration of the current situation in Japan.

Many anime fans have been anticipating the film’s release as the production team behind it has previously worked on popular hits.

Kyōhei Ishiguro, who has previously worked on Your Lie in April, directed the film. Dai Sato of Eureka Seven and Wolf’s Rain wrote the screenplay, and Yukiko Aikei (Your Lie in April and Accel World) designed the characters.

Composer Kensuke Ushio, who has previously worked on A Silent Voice, created the film’s OST.

If you are one of those who have been waiting for the film’s release—fret not. The new release date will be announced on the film’s official website and SNS as soon as it has been finalized.

For those who have already purchased their advance ticket with the original May 15 date, they can still use them for the rescheduled film screenings.