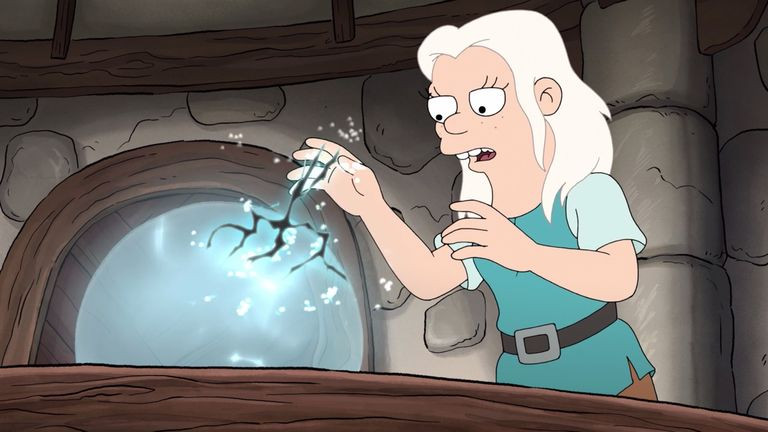 You know a cartoon will be useful when its creator is responsible for the absolute longest-running animated series of all time. Netflix wanted in on the Matt Groening action. And thus, Disenchantment was born.

The hilarious animated fantasy series first popped up on the streaming platform in August of 2018. A year and one month after, a new set of adventures began.

We have all since eaten each and every single exciting episode up. We may have already laughed our hearts out, but we still want more. Will we be getting a part 3 or 4 to the series?

Groening made the announcement himself. “We’re excited to continue this epic journey with Netflix,” he said. “Stay tuned for more cranked-up suspense, infuriating plot twists, and beloved characters getting knocked off.”

Staying tuned, we shall. With the first two parts considered as the first season of the series, that means the next 20 episodes will comprise the Disenchantment Season 2.

When Will Disenchantment Season 2 Come Out?

Ever the fans of suspense, neither Groening nor Netflix has announced a specific date for the release of the next two parts to Disenchantment just yet. The only thing we are sure of right now is that the order has been made, and we should expect the new batch of episodes soon.

In the same fashion that the first two parts of Disenchantment were released, Parts 3 and 4 are likewise looking at consecutive 2020 and 2021 releases. Watch out for the next ten episodes! As the official Part 3 announcement trailer released by Netflix confirms, we are definitely going to see them within a year.

The question of when in 2020 it will be, though, is still anybody’s guess. If the previous release dates are any indication, Part 3 of Disenchantment will most likely be hitting Netflix during the last quarter of the year.

What To Do Until Then

It may seem like a while, but remember that time flies when it comes to our favorite shows. There are already 20 episodes up on Netflix; you can watch and rewatch until the new batch arrives. When it does come, we assure you, it will be as though no time has passed.

What kind of hijinks will Princess Bean and the crew get themselves into next? We will have to wait and see.

How To Get Hulu For Free Legitimately?