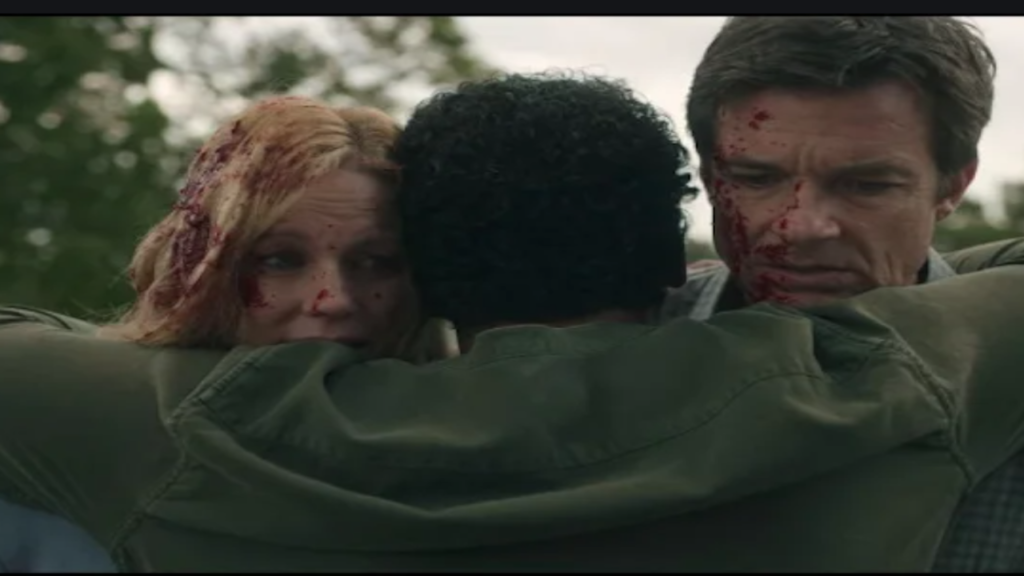 As season 3 of Ozark came to an end, major plot twists happened, which opened new challenges for the characters. Keep yourself in the loop and think of what may happen next! Here is Ozark Season 3 Ending Explained!

Marty Byrde, Wendy, and Helen went to Mexico to see their boss, Omar Navarro who had invited them to his son’s second Baptism. Helen thought that she had everything in control and wanted to turn the tables on Marty and Wendy, but it turned out to be otherwise.

What Helen did not know was the fact that Marty and Wendy had already won Navarro’s trust by sending the FBI after Navarro’s rival cartel and neutralizing Ben, who was threatening to go rogue and expose everybody.

Navarro then orders Helen to be killed who is ultimately shot by one of Navarro’s goons. Marty and Wendy are therefore given a blood baptism by Navarro which he calls “A New Beginning”.

The shocking death of Helen (and Ben) became the highlight of the finale as the Byrdes exposed themselves to the darker and deeper side.

The Meaning Behind the Shocking Ending

The last episode of Ozark season 3 bugged and shocked the audience. With the plot twists coming through, the characters had to deal with them and suffer the consequences. Since the ending managed to make our heads turn, let us know what could happen next to prepare ourselves better.

As Ruth Langmore joined Darlene Snell, both resigned from their jobs with the Byrdes. She got so furious after her boyfriend, Ben Davis, died.

Wendy, his sibling and the mastermind for his murder, even accused Ruth of his death. After deciding to go with Darlene, they are now running a business together.

Knowing that Ruth is on her side, Darlene took advantage of the situation and castrated Frank Cosgrove Jr when he beat up Ruth.

KC Mob and Darlene are in an alliance

Darlene appeased KC Mob boss Frank Cosgrove and made an offer of getting a 50-50 split distributing her heroin. She also offered him building contracts for three opioid rehabilitation centers.

KC Mob was made to choose between accepting Darlene’s offer or going into war. Although his decision was open-ended during the last episode, KC Mob continued his alliance with Darlene while weighing the pros and cons of the two choices.

What will happen next?

1.The death of Helen and Ben had a significant effect on the situation. It created alliances and rivalries that would ensure future conflicts. It will also add more fuel to the fire between the Byrdes and their enemies.

2.With Darlene now on the stronger side, since KC Mob and Ruth are already with her, she now has the power to threaten the Byrde family empire.

3.Since Ruth and Ben were in love with each other, she’ll most likely turn against his family after knowing that Wendy had her own brother killed. Thus, Byrdes have also lost one of their greatest assets in Ruth.

4.Additionally, Jonah, the son of Marty and Wendy, already has enough reasons to hate his parents after knowing the cause of his uncle’s death.

5.Since Navarro is still on the Byrdes’ side, it’s a lot easier to handle the enemies outside; it’s just that they need to continue building a strong relationship with him knowing that how easily he disposes of his own lawyer, Helen. The main struggle for the couple is the inner conflict at their home knowing that their children may turn against them.