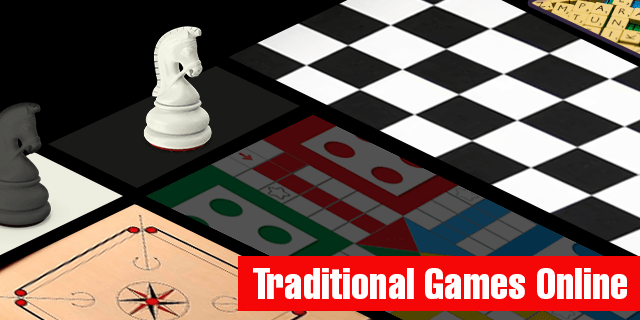 Many much-loved traditional games are now available online. Here are some of the most popular ones you can play.

One of the world’s most enduring and endearing board games, Snakes and Ladders, was originally known as Moksha Patam, which is an ancient Indian board game in which the serpents and ladders represent morality lessons. Children, and adults, still love playing Snakes and Ladders, even though it is based on sheer luck. The object of the game is to get home first. By throwing the die, you can move up the board by climbing ladders or move back down when you land on a snake. There are several online versions of Snakes and Ladders that have become incredibly popular. Some even allow you to play against other real players virtually. Named after the French word for “little wheel,” roulette is a game in which players choose to bet on numbers or colors. The roulette wheel containing a ball is spun until it loses momentum and the ball lands in a numbered space that is colored red or black. So, if you bet on 23 and the ball lands on 23, you win. And if you bet on red and the ball lands on red, you win. You can also bet on things like whether the number will be odd or even. Roulette has been the staple game of casinos for years, but you may remember playing a non-betting version of the game when you were a child because toy roulette wheels were all the rage in the 1970s and 1980s. Roulette has now become one of the most popular games you can play online. Today, you can even play live roulette online, in which you play in real-time with an actual croupier located in a studio.

The current form of Chess emerged in Southern Europe in the fifteenth century, having evolved from similar much older games of Persian and Indian origin. The game is played by two participants on a checkered board with sixteen pieces each. The object of the game is to checkmate the other player’s king. Playing chess on an actual board is still massively popular today. But it is increasingly becoming more popular online too. However, computer chess was around before it became available on the internet. Most famously, the world champion Garry Kasparov was beaten in 1997 by an IBM chess-playing computer called Big Blue. Online chess can be played at various difficulty levels, so whether you are an old hand or a complete newbie, you can enjoy playing online chess.

Tic-tac-toe is a traditional game that surely most everyone has played. In a three-by-three grid, two players take it in turns to place an X or O in a box. The winner is the player who can place three symbols in a diagonal, vertical, or horizontal row. Three-in-a-row games have been around much longer than you probably think. Such game boards have been found in Egypt that date back to 1300 BC! As for tic-tac-toe itself, an early version of the game appeared in ancient Rome around the first century BC. Today, you do not need to find someone to play tic-tac-toe with. Instead, you can simply go online and play a computerized version of the game. If you have time to kill when waiting for a bus, playing tic-tac-toe is a great way of passing a few minutes and having fun. A similar game to bingo was played in Italy back in the early sixteenth century, but it was the French game Le Lotto, which appeared in 1778, that was the precursor of modern bingo. In the early twentieth century, Hugh J. Ward standardized the game of bingo at carnivals around the Pittsburgh area. He published a bingo rule book in 1933. Ever since, bingo has been a much-loved game throughout the world. It is easy to play. You simply have to mark numbers on your card when they are called out by the bingo caller. When you mark off all your numbers, you shout “Bingo!” and claim your prize. Bingo halls have gone in and out of fashion over the years. At present, online bingo is becoming the most popular way to play the game. There are even chatrooms online where you can get to know others in the online bingo community.

Back To Basics – How To Play Blackjack

How to Connect to a Public Network Without Risking Your Data

4 Reasons Why Politicians Should Ban Gambling